Those fighting words from Nicki Minaj were heard all around the world last Sunday night during the 2015 MTV Video Music Awards.

The potential for drama was high that night. Between Nicki vs. Taylor Swift, Taylor Swift vs. Kanye, there definitely was tension in the air. We just didn’t expect that sparks would fly between Nicki and Miley.

If you missed out last Sunday and were not able to watch, or if you simply live under a rock, here’s the video of what went down during  the awards show between Nicki and Miley:

Phew. That was intense right?

Other people were crying, “Staged!” But most sources (and even Nicki herself) declares the authenticity of this moment. This beef and this heated exchange wasn’t staged and it wasn’t an act. Just look at Miley’s genuinely shocked expression on the video. This was a direct result of an earlier interview that Miley did where she made comments about Nicki Minaj’s concluded Twitter beef with Taylor Swift.

Last July, Nicki Minaj called out her lack of video of the year nomination for Anaconda. She stated that because she wasn’t white and skinny, her pop culture phenomenon chart-topping song and video was snubbed. Taylor Swift took offense and thought it to be a pointed tweet to her, but Nicki denied that it was meant for T-Swizzle and they ended the misunderstanding quickly. I mean, they did perform together during the VMAs.

So there’s no bad blood there.

A mere days before the VMA Awards, which Cyrus was slated to host, Miley’s comment regarding this whole Nicki vs. Taylor issue was published.

Obviously Nicki Minaj did not take to Miley’s comment kindly. AT ALL. A lot of people, Nicki included clearly, that Miley’s comment was way too personal and basically stereotyped Nicki as an angry black woman.

As she came up onstage to receive the Best Hip Hop Video for Anaconda, she then called out Miley.

That anger is real.

So whose side are you on? Are you Team Nicki or Team Miley?

One thing is for sure though, their confrontation aside, both ladies served up provocative fashion on the red carpet. 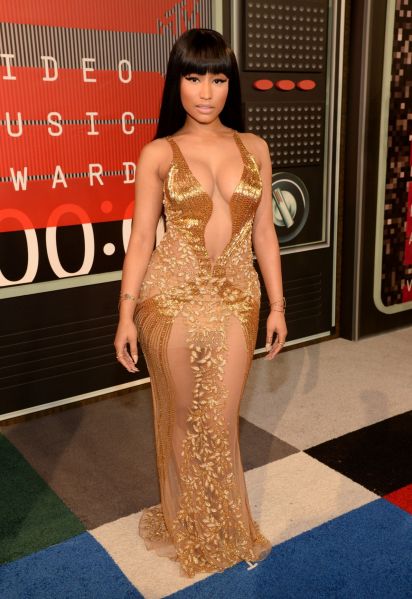 Nicki and Miley can certainly serve up some exceptional red carpet sexiness though.

So that’s the latest in pop culture news, it’ll be the brunch topic this Sunday for sure. I’m glad I prepared you. Have a great weekend ladies!